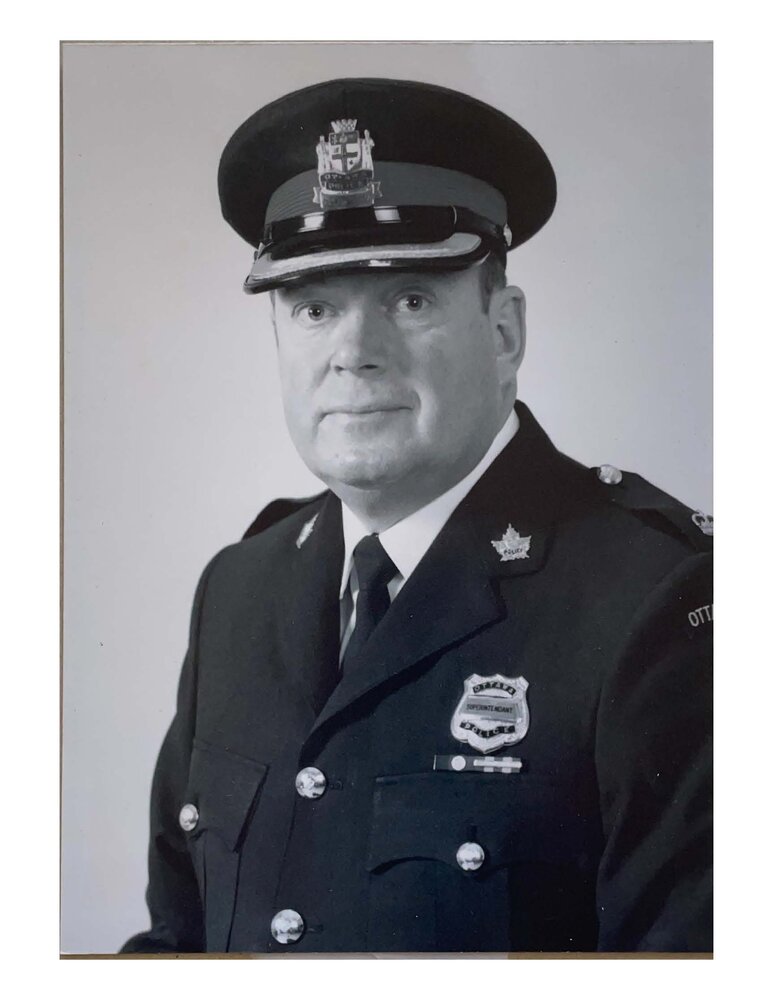 It is with great sadness, but with gratitude for a life well lived, that we announce the passing of John Andrew McCombie in Naples, Florida in his 90th year. Beloved husband of Nancy (nee Band) . Dearly missed by sister-in-law Joyce (Kevin) Fortune and their children Tom (Mandy) Fortune and Jennifer (Bill) Vander Doelen. John was born in Brockville in 1933 and grew up in a large family. He is survived by his sister Darlene (Brian) Burns. Predeceased by siblings Helen, Robert, Andrew, Jean, Gilbert, Evelyn, Bruce and Judy.  Fondly remembered by sisters-in-laws, Kathy McCombie and Donna Eaton and brother-in-law Ray McCaugherty.  Cherished uncle to many nieces and nephews.  John led a life of service to his country and community. He served in the Navy in the Korean War from 1949-1953. John later went on to have a distinguished career with the Ottawa Police Services, retiring with the rank of Superintendent after 41 years.  He founded the Ottawa Police Underwater Search and Rescue Squad in 1956 and was a proud graduate of the FBI National Academy, Quantico, Virginia. He received the Police Exemplary Service medal and the Queen’s Diamond Jubilee medal, and he was officially commended for bravery by the Board of Commissioners of Police for the City of Ottawa. Following his retirement he served on the Board of the Alcohol and Gaming Commission of Ontario and was the first retired police officer to serve on the Police Services Board. John and Nancy were married for 54 wonderful years and hosted many fabulous times with family and friends at their home on the Rideau, their Brockville cottage and in Naples FL. They shared a love of animals, golf, football, boating, and travel.  Lucky, Susie, and Casey were forever in their hearts. John was a long-time member and past president of the Ottawa Hunt and Golf Club.  He will be remembered for his big presence, generous heart, colourful commentary, and loyalty to friends and family. Private internment. Celebration of life to take place at the Ottawa Hunt and Golf Club April 30, 2023, 2-4pm.