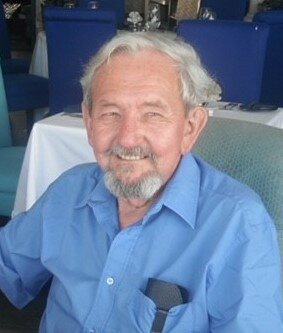 It is with sadness that the family announces the passing of a dear husband, father and grandfather. Loving husband of Margaret for 63 years, father of Nicola Aquino (Manuel) and Michelle, and grandfather of Anthony and Patrick Aquino. Also leaves to mourn his brother, Dr. Christopher Wheatley (Anne) of Leyburn, Yorkshire, England.

Brian was born in Richmond, Yorkshire, England, son of Albert Edward Wheatley and Freda May Parker and was a proud graduate of the Richmond Grammar School. He went on to complete his MBBS at Durham Medical School, to spend time as the Surgical Registrar at Royal Victoria Infirmary (RVI) in Newcastle upon Tyne, and became a Fellow of the Royal College of Surgeons of Edinburgh (FRCS(Ed))  in 1967.

With an interest in travel and making a difference in the world, he moved his young family to Masasi in southern Tanzania, where he worked as Surgeon and Regional Leprosy Officer, based at Mkomaindo Hospital. He then spent time as Senior Surgical Registrar at Newcastle General Hospital before moving to Flin Flon, Manitoba where he worked as a Surgeon and General Practitioner. He returned, with his family, to Africa with LEPRA (British Leprosy Relief) seconded as Regional Leprosy Officer for East Central State, based at Enugu, Nigeria.

Deciding it was then time to settle down a bit, he returned to Canada and joined Medical Services Branch, Health and Welfare Canada (later Health Canada), working initially in Manitoba and then Ottawa in various positions relating to Northern Indigenous Health and subsequently Environmental Contaminants. During his tenure he also spent time in Whitehorse, Yukon on a secondment as Assistant Deputy Minister of Health for the Yukon. He retired from Health Canada in 1997.

Brian enjoyed travelling with Margaret—to all seven continents—including spending many weeks each year escaping the winter cold, in Holetown, Barbados. Summer weekends were spent at a cottage at Clyde Lake, Ontario where, apart from reconstructing the cottage, he also enjoyed canoeing and fishing.

A Funeral Service will be held at the Highland Park Remembrance Chapel, 2037 McGee Side Road, Carp on Monday, January 9, 2023 at 11 a.m. Interment to follow. For those of you who wish to join the service virtually, you may do so by visiting the following link Service Link.

In lieu of flowers please consider a donation to Doctors without Borders/Médecins Sans Frontières (MSF).

Share Your Memory of
Dr. Brian
Upload Your Memory View All Memories
Be the first to upload a memory!
Share A Memory
Send Flowers