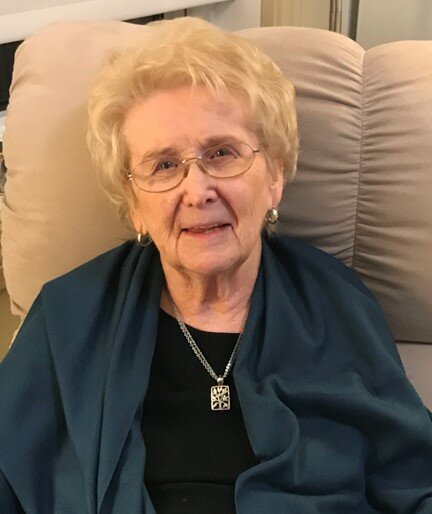 It is with comfort and peace in our hearts that we share, our dear mother, left this earthly life to be with the heavenly Shepherd early Tuesday morning, October 4, 2022, surrounded by the love of her family at the Élizabeth Bruyère Hospital, Ottawa.

Vicki was born on September 3, 1929 in Thalberg, MB, daughter of the Rev. Eugene and Anna Maria Buehler.  She grew up with brothers Eberhard, Martin, Herbert and sisters Irmgard, Ursula and Gisela.   She experienced the beauty of the West having lived in  Winnipeg, MB; Flatbush, AB; Steinbach, MB; Neudorf, SK; Fort Quepelle Valley, SK; Yorkton, SK; and Canora, SK and often talked about her life with fond memories.

In 1952, Vicki graduated from Nursing School in Yorkton, SK and eventually moved to Ottawa, ON to live with her brother Eb.  She worked at the Civic and General Hospital.  During that time she attended St. Peter’s Lutheran Church as well as the Lutheran Church Women (LCW) serving as Secretary and President.   While participating in Luther League she met a special young man, Douglas Smith, falling in love they were married on September 3, 1955.   Vicki and Doug were blessed with four children, Jeffrey, Gregory, Marilyn and Nancy.

As Douglas was a member of the RCMP the family moved to Edmonton from 1961 – 1963.  The family worshipped at Mt. Zion Lutheran Church, Vicki was active in the life of the church and in the nursing community.

Returning to Ottawa, Vicki joined the Community Nursing Registry – 1976 -1981 of which during that time she served on the Board and as elected President for six years.  She retired from nursing in 1998.

Vicki was a member of All Saints Lutheran Church, Ottawa, participating in all areas of ministry. She also worshipped at St. James Anglican Church in Manotick while living at Manotick Place.

Family time was a gift from God and she cherished the time entertaining special events with her children, grandchildren and great-grandchildren.

She will be remembered for entertaining, her embroidery work, reading non-fiction, choir singing, theatre work and clowning, flower arranging, doing picture puzzles, playing euchre, and always looking for a competitive game of Scrabble.

Vicki also enjoyed listening to classical music, show and movie tunes, with a strong passion for the The Sound of Music.

Vicki and Doug also attended many spiritual retreats with the Sisters of Mary and participating in the life of Temple Pastures in Gatineau with Rev. Dr. Frank and Joan Uhler.

Vicki, lived 93 years on this earth, with grace, determination and a loving heart, sharing her faith each and every day.

She is predeceased by her loving husband, Douglas Bowman and her son Gregory.

A Memorial service will be held at St. James Anglican Church, Manotick, ON on October 29, 2022 at 11:00 am.  An inurnment of ashes, graveside service, will take place at Guelph Woodlawn Cemetery at a future date.  In lieu of flowers, a donation can be made the Sisters of Mary, Millet, AB, to St. James Anglican Church, Manotick, ON or the charity of your choice.

Share Your Memory of
Augusta Victoria "Vicki"
Upload Your Memory View All Memories
Be the first to upload a memory!
Share A Memory
Send Flowers