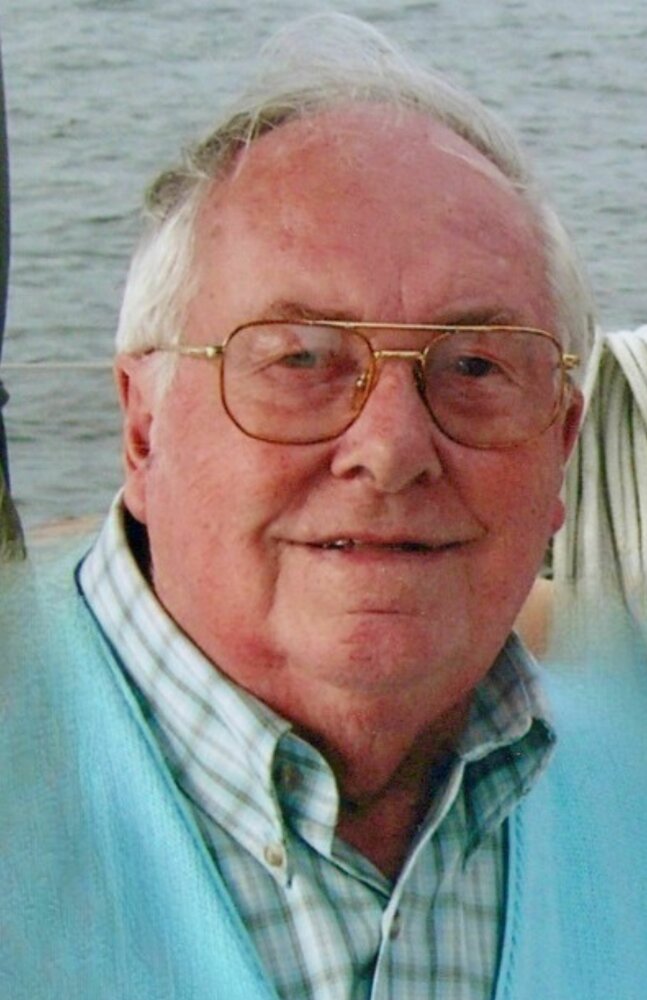 Ian was born in Wareham, Dorset, England in 1924. As a little boy, he travelled via passenger freighter across the Atlantic Ocean to finally land in Vancouver, BC. Growing up in Vancouver, Ian loved his many dogs, and became well-known as a rink rat, as he’d often and eagerly clear the ice rinks for hockey and public skating at nearby arenas. He attended Templeton Junior High School and King Edward High School before entering the University of British Columbia (UBC), where he graduated in 1947 with a Baccalaureate in Commerce. It was at UBC where his love for curling and soccer developed. He would often reminisce of the night in 1945, when the announcement came across the radio that World War II was over. At the time he was in military training, and he played his well-beloved trumpet all night long, while celebrating with his fellow recruits. It was during these early post-war years that Ian met Eleanor at a causal United Church badminton event, and their life blossomed from there to marriage in 1952.

Ian’s career began at the Canadian Revenue Agency (CRA)’s Vancouver office, working with the RCMP in Investigations. In 1967, he transferred to head office in Ottawa on Sussex Drive. Over the years, Ian would work at several locations, including the office at Data Centre and Heron Road, the Anti-Inflation Board (AIB) downtown, and finishing his career as a director at the Tax Training Centre on Heron Road.

Ian’s retirement began in July of 1981. Thereafter, you could find him out walking his dog, gardening, sharpening his skills at curling, travelling the world with Eleanor to attend the Silver Broom competitions, and skating on the Rideau Canal or at the local public arenas. With his tax background, Ian also became a steward for many years at Riverside United Church. In his spare time, he was well-known for taking lots of pictures with his trusty Minolta SLR camera - especially of his grandchildren, the trees as they changed colours in the fall, or of the ice sculptures found at Winterlude.

As Ian grew older, his focus changed to reading the newspaper, keeping in touch with friends and relatives, and regularly watching baseball. He loved his TV, and had one for almost every room (as well as one from every era). Ian loved to dance, especially to big band music. The Lawrence Welk Show on Saturday nights was always a hit. After losing Eleanor, his traveling diminished. In his mid-80s, Ian moved to Alta Vista Manor Retirement Residence, where he happily resided for 11 years. While there, he would often walk to the nearby corner to say hello to his grandchildren, surprising them at the end of their schooldays at Hillcrest High School. In 2019, he moved to Saint Patrick’s Home of Ottawa. His infectious enthusiasm and positive outlook on life persisted resiliently until his passing. As quoted by Ian, “Life is tough, but it’s a good day when your feet hit the floor to get up!” No matter how slow.

Donations may be made to the St. Patrick’s Home of Ottawa Foundation (613-731-4660) or The Dementia Society of Ottawa and Renfrew County, donations@dsorc.org (613-523-4004). A special thank you to Dr. Monica Sobala Drozdowski, Dr. Catherine Tennant, the Pastoral Services, and the entire 4th floor Kilkenny staff at St. Patrick’s. You provided exceptional care to Ian. Your sincere dedication and commitment were outstanding, especially throughout the challenging times of the COVID-19 pandemic. Private family service. Inurnment Ocean View Cemetery, Burnaby, B.C.

Ian will be dearly missed by all who knew him. Undoubtably, those waiting for him in Heaven will be saying: “Yay, Bud is here! What took you so long? Well, you’re just in time for happy hour!” May he rest in peace.

Share Your Memory of
Ian
Upload Your Memory View All Memories
Be the first to upload a memory!
Share A Memory
Send Flowers