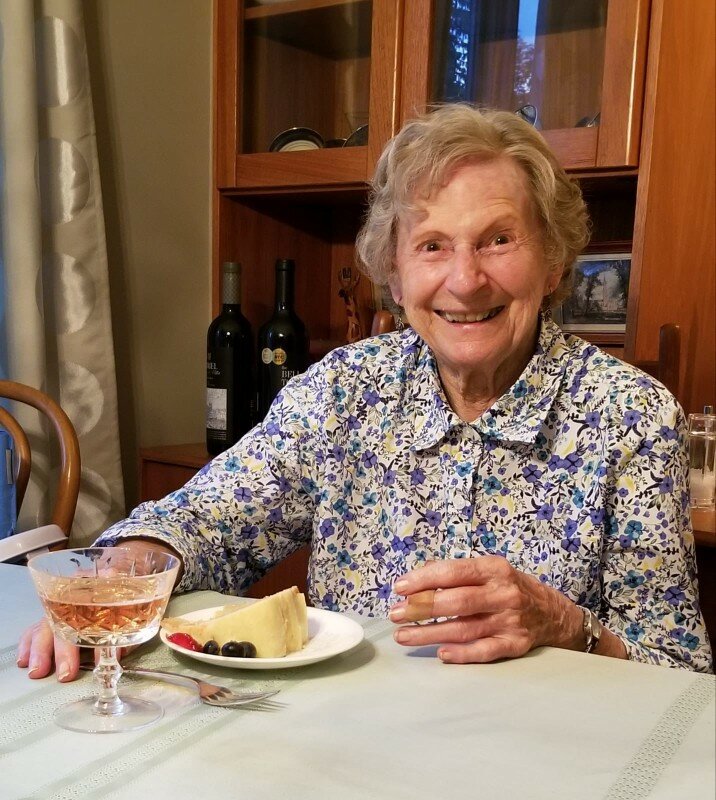 On Monday, August 29, 2022, Marion Viola Armstrong (nee Roberts) passed peacefully in her home with her sons by her side.

Marion was born and raised in Montreal, the only daughter of Winnifred Barkley of Williamsburg, ON, and William Harold “Harry” Roberts of Brigus, NL. She graduated from Montreal High School, Douglas College and Queen’s University before returning to Montreal to teach elementary students in grade 5.

In 1953 while at Queen’s in Kingston, Marion met Bill Armstrong, a young officer cadet from RMC. They were married in 1956 and began a nearly 50 year life together that would see them traveling across the country from Gander, NL to Comox, BC and to Germany before settling in Ottawa.

Marion was a lifelong lover and patron of the arts. She was a regular attendee of the Stratford Festival, the Ottawa Chamber Music Festival, opera, symphony and concerts at the National Arts Centre in Ottawa, and concert halls across North America and Europe.  She instilled this love of music, theatre and art in four sons, especially during a three year stay in Germany, where tours of castles, cathedrals and concert halls were de rigueur.

In retirement, Marion and Bill were avid hikers and skiers. They logged many miles together, hiking through Canada, the U.S., Great Britain and Europe, the Rideau and Appalachian Trails, and the Camino de Santiago. Travels took them all over North America to visit family and friends, all over Europe, and as far as South Africa.

In every city that the family called home, Marion was an active community volunteer. Whether it was her sons’ sports or schools, sharing her love of sewing, knitting or quilting, she gave many hours of her time to help in any way she could. In her last several years, she could be found at Options Bytown every week helping residents with repairs to clothing and conversation.

Throughout her life Marion was described as caring, compassionate, intelligent and kind. She was determined, fiercely independent, strong. In the end, she left us as she lived – in full control and on her own terms.

Marion was predeceased by her husband of 50 years, Bill, in 2006. She is survived by four sons, grateful for the lives we have lived: Howard (Parksville, B.C.), Stephen (Karen, Kingston, ON), Graeme (Ottawa, ON) and Russell (Durban, South Africa); a grandson Sean (Tina, Kingston, ON); a great grandson Theodore (Kingston, ON); nieces, nephews, cousins and a great many lifelong friends.

We will gather to celebrate a wonderful life on Thursday, September 8th at 11:00 A.M at the Pinecrest Remembrance Chapel, 2500 Baseline Road. Marion’s memory can be honoured by in memoriam donations to The Rideau Trail Association, The Ottawa Hospitals Foundation, or a local charity of your choice.

Share Your Memory of
Marion
Upload Your Memory View All Memories
Be the first to upload a memory!
Share A Memory
Send Flowers