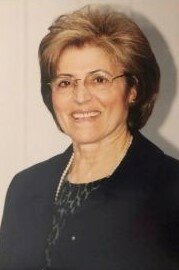 Passed away peacefully on Thursday July 21st, 2022 after a long and courageous battle with Alzheimer’s.  She was 92. She was preceded in death by her late husband Ioannis (John), whom she now joins in heaven.

She was born on April 30th, 1930 in Zoni, Megalopoli, Greece, the daughter of late Thanasi & Athena Zouzoulas (nee Anastopoulos).  Vassiliki worked as a seamstress in Megalopli in her early teenage years and then left to go to Athens for more work.  There, she was introduced to her husband, John, who was already living abroad and immigrated to Canada at the age of 30 to marry him.

Vassiliki lived a full life as a wonderful mother, homemaker, and seamstress to many friends and family.  Those who knew her know that she would never say no to anyone when it came to a fitting.  But most of all, she loved her family and will be dearly missed and forever in our hearts.

Until her health made it impossible to live on her own, she moved into St. Patrick’s Home of Ottawa in 2015.  A special thank you to the staff at St. Pat’s where she was cared for for so many years.

Vassiliki is survived by her son George (Dikea), and daughter Athina (Nick) as well as her grandchildren, Maria (Kosta), Elizabeth (Matt), Yanni, Pamela (Jordana) and two great granddaughters, Sofia and Valentina.  Some of the biggest joys in her life were her grandchildren.

She was preceded in death by her brothers Andreas (Panagiota), Dimitrios (Ekaterini), Christos (Anna), Evaggelos (Despina) and John (Maria).  She is survived by her sister, Stavroula (Alexandros) Nantsios and brother George (Athina) Zouzoulas and many nieces and nephews.

Family will receive friends at the Dormition of the Virgin Mary Greek Orthodox Church (1315 Prince of Wales Drive) on Tuesday, July 26th, 2022 at 11a.m with Funeral Service to follow at noon.

In lieu of flowers, donations can be made to the Dormition of the Virgin Mary Greek Orthodox Church  as well as the St. Patrick Home of Ottawa or the Alzheimer’s Society of Ottawa and Renfrew County. In the donation note please indicate “In memory of Vassiliki Merziotis.”

Share Your Memory of
Vassiliki
Upload Your Memory View All Memories
Be the first to upload a memory!
Share A Memory
Send Flowers