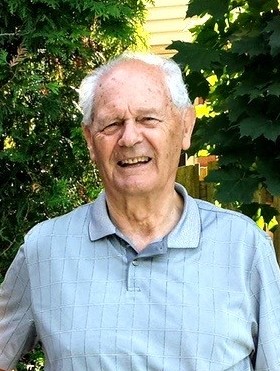 Harold was a kind soul and a gentleman, a good man, who will forever be in our hearts. He was born July 24, 1929 and raised in Meteghan, Nova Scotia the second of ten children along with his identical twin brother Gerald. Harold moved to Ottawa in 1953 for work as a hydrographic surveyor. He married his loving wife Doris in 1955 and raised eight caring children together with her. He is grandfather to twelve grandchildren and two great grandchildren with a third on the way. Harold retired after thirty-two years as Senior Editor and Quality Control for the Canadian Hydrographic Service at the Federal Department of Fisheries and Oceans in Ottawa. In retirement, Harold enjoyed woodworking and started his own business making beautiful handcrafted wood pieces. He liked a simple way of life surrounded by his loved ones and especially relished large family feasts where he excelled in cooking arguably the best rappie pie. In his later years, Harold was diagnosed with dementia that sadly robbed him of so much that he enjoyed. All will miss him tremendously. He is now at peace.

For those who wish memorial donations can be made to the Alzheimer’s Society of Canada.

A private family service will be held and interment at Pinecrest Cemetery, Ottawa.